Happy Easter, to those of you who are into that sort of thing!

I'd never been to a conference or convention or anything else before last week. It's usually a money thing, sometimes a scheduling thing, but the International Conference for the Fantastic in the Arts is a Florida thing, and I'm a Florida thing, so I can drive there and not sweat the hotel, so that helps. I'm going to be name-dropping like a muhfuh here, so get used to it.

I swung up to Orlando for the pre-conference party the Tuesday night before last and met some cool people there including Kathleen Ann Goonan. I felt a bit like a dope because I knew I'd read something by her, but couldn't remember what. I met quite a few Scandinavian writers and academics and a couple from Australia. I felt dumb after asking Peter Halasz if he was Adam-Troy Castro. But Castro lives in Florida, I figured he might be there, and I've only ever seen tiny little pictures of him on Facebook. I spoke to Guest Scholar Constance Penley who teaches about the intersection of feminism, porn and related matters at UC Santa Barbara. I saw others whom I knew by seeing their photos online (after the Peter Halasz incident, I should probably say I "thought" I knew them) but I didn't see a non-intrusive way to say hello. I had some great conversation with Diane and Lee Weinstein, who have been involved with science fiction for, I think, thirty-five years. Diane answered lots of questions that I had about her years of slush reading for Weird Tales and told me the story about how she was hired by George Scithers.

Then I had to go back home and work the day job for three days.

As soon as I picked up my name tag on Saturday, I introduced myself to Jim Kelly and Sheila Williams. Sheila said my name sounded familiar and Jim asked, "Has she rejected you?" The answer was, "Yes," of course, but that's okay. That's part of doing business. I re-saw Kathleen Ann Goonan and told her it was Memory Dog that I'd read by her and I thanked her for that great story. She was sitting down to morning coffee with Ellen Datlow and although I forgot to introduce myself to Ellen, I thanked her for a positive rejection she gave me back in her Omni days. That rejection kept my spirits afloat for a couple of years.

I saw Kij Johnson and Gay Haldeman and stopped to thank Kij for 26 Monkeys, Also the Abyss (I spent the day thanking a lot of people for a lot of things), and told Gay that I'd briefly spoken to her husband Joe during a StarShipSofa online event. Let me tell you, Gay is one of the nicest and friendliest people I've ever met. After a thirty second meeting, she treated me like we were old friends whenever she ran into me the rest of the day.

I met the super-swell Mary Anne Mohanraj and Jed Hartman and thanked them for Strange Horizons, probably my favorite online science fiction mag. My novel came up, as it did with others throughout the day, and I was asked many times for my elevator pitch. Most said it was a really good elevator pitch.

Everybody went out to the pool for a massive group photo and I introduced myself to Neil Gaiman while we were waiting. I asked him if I could take a photo of him later with a hand-drawn thought balloon. He said sure. I met Joe Haldeman and had a really brief conversation. I also met his daughter, though I didn't realize it. I could have had much longer conversations with people if only I was good as social things. After thanking most people, I couldn't think of much else to say to them.

I spent an hour or more outside, hanging with Liz Gorinsky, Keffy Kehrli and Siobhan Carroll, talking theater, comics, movies and music. Then I went in and decided to get in the back of Neil Gaiman's signing line so I could take that photo. It took an hour in line, but Neil was nice enough to stay past his appointed time so he could squeeze everyone in. My pal, Grant, wisely lives by the maxim, "What Would Neil Do?" So I wanted to take this photo, send it to Grant out of the blue, and blow his mind. I succeeded.

After that, I hit the book room and grabbed a copy of Karin Tidbeck's Jagganath which Grant praised greatly and which also won the Crawford award for Karin later that day. The gentleman who rang up the book told me to take a free book from the dollar table. There were lots of awesome old science fiction mags on the dollar table, including issues of If. I've never owned an issue of If and scouted through until I found one with stories from Philip Jose Farmer and Robert Silverberg. I'm not near it at the moment to take a photo , but here's an image from the Internet: 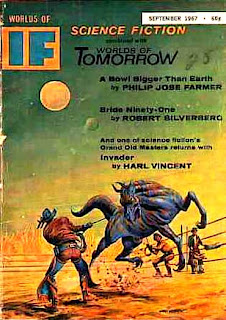 In my mind the mag should have worth at least fifty bucks. Getting it for free felt like one hell of a score.

I hit a couple of panels after that, the tail end of one on sex in science fiction, including a paper on Samuel R. Delany's, Aye, and Gomorrah, and a panel on politics in science fiction, with papers on Junot Diaz' Monstro; Octavia Butler's Parable books; and Frank Herbert's Dune Messiah. I loved the insights on works that are dear to me, but I was tired, hungry, and wrestling with my ADD. It wore me out.

Then I went total fanboy on poor Ted Chiang in the hotel lobby and gushed about how much StarShipSofa's Tony C. Smith and I love his work. I said something like, "Tony sees you as the paragon of the new face of science fiction." He got a funny look on his face and smiled and said "Okay," and then I split. As I walked away, I realized there may have been some miscommunication. When I said, "New face of science fiction," I meant post-cyberpunk, but I think Ted might have thought I meant, "You're a fresh-faced young lad with a couple of stories under your belt, good for you!" I walked away realizing, "He thinks I'm an idiot!" Ah, well. Get in line, Ted.

It was still a couple of hours before the banquet, so I grabbed some fries and then hung with Keffy, Jay Lake, Mari Ness and briefly, another gentleman whose name I didn't catch. Sorry, Gentleman. Anyone who knows anything about Jay knows that he produces crazy amounts of work. Listening to just a little of what he had to say left me in awe of his experience.

Then there were some pre-banquet drinks and cheese and stuff. I was about burnt out, socially speaking, and had to leave the crowd a couple of times. The whole day had been full of new people, new people, new people. I'm really not used to meeting so many new people, and although I did really well (for me), I had my limits.

The banquet was cool, the food was great, we got free books, though I lost mine, having to head to the men's room right near the end. I met some cool people and we talked a lot about accents and dialects, being at a multinational table.

Everybody hung out by the pool afterward. I still wasn't able to push myself into other people's conversations, but luckily one formed around me spontaneously with Lynette James, James Patrck Kelly, and Theodora Goss. Then I hung with Keffy some more, talked podcasts with fellow SF Signaler, Karen Burnham, and met Glennis LeBlanc, owner of The Missing Volume. Glennis was talking to E. Lily Yu and the highpoint of my night was when Lily figured out that I had written Beauty Belongs to the Flowers. She shuddered and stepped away from me, then did both several more times. When she was about twelve feet away, she said, "It was a great story, but . . ." and then shuddered some more. It was the best review I've ever received.

On the way out I saw Mari Ness, who was waiting for a cab. I offered to give her a ride and, after I dropped her off, got stuck in Orlando for a while, as I was thinking about the day rather than paying attention to the signs. I got home about 4 a.m. and instead of going immediately to sleep like a sane person, I skyped with Grant. I finally got to sleep at around 6 a.m.

ICFA certainly isn't going to be most people's bag of fish, but it was one of the most awesome things I've ever done. I look forward to hitting other cons in the future.

Did you meet Shaun Duke? :)

Yes. Yes I did. I met the hell out of Shaun Duke.

I can confirm that you did indeed blow my mind. Still blown, in fact.

I'm thrilled that you had such a great time. We're a happy Internet tribe, but meeting people who you've only ever known online is a wonderful thing. And just wait until you experience Worldcon...

Thanks, Grant! It is a very different thing to meet someone in person. When Karen Burnham came up and said "Matt?" to me, all I could think was, "Who is this person and how in the world does anyone here know me?"