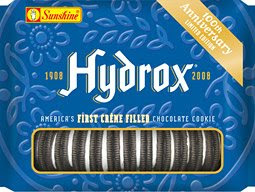 You can't spell Hydrox without rox, and rox they does. Love this cookie, damn you! Hydrox are like Oreos only Hydrox taste good. In recent years, they became harder and harder to find in the wild until they went the way of the dodo. Now they have risen from the dead, like the zombie dodo, and I encourage you to seek them out (I found mine at Wal-Mart) and stuff them into your mouth by the fistful. Let their manufacturer, Kellogg's, know that you will buy these cookies and they will make more. Tell your family, tell your friends. Tell your enemies and they will become your friends!

And then maybe we can all get along.
Posted by Matthew Sanborn Smith at 6:52 PM No comments:

Email ThisBlogThis!Share to TwitterShare to FacebookShare to Pinterest
Labels: Hydrox

This week, the StarShipSofa is pleased to present Aural Delights No. 38. Blast off!

Flash Fiction: Billy And The Wizard by Terry Bisson

Main Fiction: Hellfire At The Twilight Club by Kage Baker

Posted by Matthew Sanborn Smith at 1:43 PM No comments: 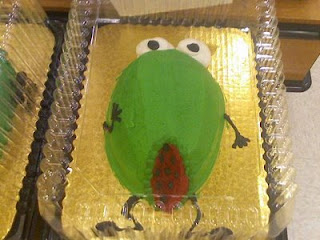 Oh, Jesus, this is funny. My son and I just spent the last hour reading through this magnificent blog, Cake Wrecks, laughing until tears filled our eyes. You must experience this for yourselves. This blog gets a permanent position under "Recommended Site Seeing" over to the left.

Magical.
Posted by Matthew Sanborn Smith at 12:37 AM No comments:

Email ThisBlogThis!Share to TwitterShare to FacebookShare to Pinterest
Labels: Funny

I dig the biological intricacies we've evolved, so this caught my eye (and ear):

Is it ever going to be easy, ladies? And then there's this which made me feel great about my own life expectancy:

You go Ernie! I've known for a while that it prevents prostate cancer. At this point, I'm not only immune to prostate cancer, but my blood is the cure for everyone else.
Posted by Matthew Sanborn Smith at 9:28 PM No comments:

This week the StarShipSofa is pleased to present Aural Delights No. 37. Blast off!

Flash Fiction: What's Expected Of Us by Ted Chiang

On The Sofa With… Alastair Reynolds

Posted by Matthew Sanborn Smith at 1:41 PM No comments:

Georgia On My Mind

I'm usually pissed at the media for talking a story to death, but today I'm pissed because they're not covering the Russian invasion of Georgia nearly enough. I want to know what's happening. Fuck John Edwards and fuck Obama and McCain for a couple of days and tell us about the important stuff!

Russia's invasion is horrible and disturbing and people are dying terrible deaths for power plays. Putin, ex-KGB man that he is, is a Soviet to his core and the events of the past few weeks hearken back to the U.S.S.R.'s incursions in Afghanistan, Hungary, and Czechoslovakia to name three. Worse yet, they hearken back to our own invasion of Iraq.

There is no fundamental difference between what's happening in Georgia today and what happened in Iraq in 2003. A superpower creates a rationalization to present to the world and unilaterally destroys another sovereign nation. Who's going to join the defender against a world power? Georgia's President begs for help. He's fucked. No one is going to join in a war against Russia. No one ran to Iraq's defense. We'll see this again when China sweeps up Taiwan, U.S. treaty or not. We're all playing RISK and the little people are paying with everything they have.

We have lost the moral high ground as well. Maybe we can convince G8 to become the G7 once more. Maybe we can encourage sanctions. But our moral influence has evaporated. Any discretion that we point out on the Russians' part can be reflected back on us. Should the G8 become the G6? Maybe the Russians will petition for it if they get tossed out. What kind of logical, legal defense could we present to ensure a different treatment for ourselves?

Bush can protest Russia's actions. He can protest China's human rights violations. He should do both of these things, whether or not he's guilty of them himself, so I back his complaints. But what kind of weight do they carry? Who takes them seriously and what power do our words have when we've bankrupted those words through our own actions time and time again?
Posted by Matthew Sanborn Smith at 11:33 PM No comments:

Help me out here, gang. The wife requests that everyone out there who has DirecTV please tell customer service that they want the Funimation channel added to their line-up. Believe me, if you're an anime fan, you want it too. She suspects that it may happen as they just moved Noggin from channel 298 to 301, freeing up a spot right after Cartton Network and Boomerang, but who knows? Help a sister out. You can e-mail DirecTV here: http://www.directv.com/DTVAPP/global/contentPageIF.jsp?assetId=P4560006
and you can e-mail Funimation here: http://webinfo.wilengroup.com/cablefax/getfun/
She would even get a Comcast box if they picked it up.

In a related story, some Orwellians have begun posting Orwell's diaries here: http://orwelldiaries.wordpress.com/
Having begun yesterday, they're posting each entry on its seventieth anniversary, so today we get August 10th, 1938. What's neat is that you don't just get the entry, you get a hyperlinked entry with editorial footnotes (therefore I had the fun of learning that Orwell's dog was named Marx). Very cool. I'm not an Orwell scholar but I do believe that he was one of the most important writers who ever lived, not just for the content of his work, but for the style. I've linked a couple of times on this blog to his magnificent essay, Politics and the English Language, and there, I've just done it again.
Posted by Matthew Sanborn Smith at 12:52 PM 2 comments:

I'm On The Sofa Again

No, not the psychiatrist's sofa this time, but the StarShipSofa. My first piece of non-fiction, Jim Sawgrass and the Family Bulbs is on the Sofa's Aural Delights No. 36. Lot's of other great stuff on there as well (Paul Di Filippo is one of my favorites). I hope you enjoy the show!

On The Sofa With Jeff Carlson

Posted by Matthew Sanborn Smith at 2:30 PM No comments:

Email ThisBlogThis!Share to TwitterShare to FacebookShare to Pinterest
Labels: Jim Sawgrass and the Family Bulbs, my stuff, starshipsofa

For those of you who don't know, I love me some bossa nova. It's time you did too. Here are Tom Jobim (The song's writer) and Elis Regina singing Águas de Março. I dare you to watch this video and remain perfectly still throughout.


P.S. Don't be an ass and try to hold still, just enjoy the music.
Posted by Matthew Sanborn Smith at 11:20 PM No comments:

WE
By Matthew Sanborn Smith
After tens of thousands of years in our present form, we finally realized that maybe, like us, humanity itself was a multi-cellular creature and all of us, well, we were just cells. We started watching us, then, real close, to see what we were up to. Looked kinda fuzzy from here. Of course, we pointed out, our cells, the little ones that make up our individual bodies, you know, blood cells, bone cells, skin cells, they probably couldn't see what was going on in the big picture from their perspective either.

We thought, well, maybe, trying to see what we're on about is actually throwing it all off. We agreed, but then replied, if we could understand what the hell we were up to, we're a damned sight better than we were.

We made ourselves feel bad with that, so we just went back to selling shoes and killing ourselves.
Posted by Matthew Sanborn Smith at 10:57 PM No comments:

In Which The Plucky Little Squirrel Learns A Lesson

You can use your heroes to effectively fuck yourself up if you're not paying close attention. I've been reading and watching interviews with Alan Moore the past few days and some sick part of me told the rest of me that I wasn't working enough like Alan Moore and that I really needed to start doing so. The rest of me, being a Big Dummy the likes of which even Fred Sanford had never seen, said, "Okay, yeah."

Then all of me proceeded to beat all of me up for the remainder of the day.

I slap myself in the face and scream in a television drama sort of way, "Get a hold of myself!" One Alan Moore is precisely the amount of Alan Moores that the universe needs. You'd think that in middle age I wouldn't need to be told this, but I do. I've got to do life my own way, no matter how awesome those other people are doing. I think if Mr. Moore read this, he would agree whole-heartedly.

And then maybe he'd call me a git, if he uses that word.
Posted by Matthew Sanborn Smith at 1:46 AM No comments: