My take on National Novel Writing Month will be National Flash Writing Month. I'm going to write 50,000 words of flash fiction this November. Let's say 250 words a piece (Though that's not in stone) so we're looking at 200 stories. I believe this is in line with my goal as I may try to sell some of them, and expand others to short stories. I can use goofy ones for the Beware the Hairy Mango podcast.

Dear Some People On The Internet

Dear Some People On The Internet,

You get upset at stupid things.

Many people die horrible and unjust deaths in this world. Many starve. Babies are beaten to death.

And you throw shitfits when someone offends you with their words.

Grow up. Grow a spine. The world isn't a polite place to be. We living things eat each other to survive.

Mom used to say, "If they're calling you names, just ignore them." What Mom knew but didn't say was that you can't change an asshole, so what are you going to do? Raise your blood pressure? Who's in control of you? You or Mean People?

I'm betting that people who have to struggle for food or for survival in a war zone somehow don't let other people's words eat them up. We can't help that we were born into our soft lifestyles, but let's get some perspective here. At the very least carry yourselves with some dignity so you don't look like whiners to the other three-quarters of the planet.

If you're planning to comment that I'm getting upset over a stupid thing, don't strain your fingers. I already know that.
Posted by Matthew Sanborn Smith at 6:47 PM No comments:

As late as one month ago, I thought I could still pull off my goal of 52 stories in 2010 and a flurry of activity ensued. Then life straightened my ass out again. I won't bore you with a litany of excuses, I'm just letting you know it ain't happenin'. If I can't do that, I have no idea how I'll make my ultimate goal after which this blog is named. However, I'm not fretting at the moment. I'm still moving in that direction and If I end up being like one of those marathon runners who limp over the finish line fourteen hours after everyone else has left, I'll be okay with that.

That being said, this has still been the most successful year ever for my writing career, so you're not going to hear too much bitching from me. I haven't really gone into my health, but about a month and a half ago I found out I was zooming down that slope into all those middle-age fat diseases and decided I wasn't going to have any of it. I've dropped twenty-five pounds since then. Everybody was telling me how great I looked yesterday. Once I drop the remaining twenty-five, they'll only be talking to each other: "Jesus, Matt looks sickly!" Normal looks sickly to Americans..

Gord Zajac, the swell guy who edited my story Fluff and Buttons on the Teddy Bear Range for Chizine was nudging me about a novel the other day and I told him, "Not now," and then pulled out an incomplete novel and started digging into it. Don't anybody get your hopes up.

I'm reading some Raymond Carver right now as I have a couple of stories in suspension that could really benefit from his influence.

If you need some Fiction Crawler in your life, head over to this week's StarShipSofa. I apologize for talking so damn fast in it. I didn't realize it until I listened to it in comparison with everyone else. You also get a story by Pat Cadigan, the First Lady of Cyberpunk!

Fact: Looking Back at Science Fiction by Amy H Sturgis

Fact: Everything by Morgan Saletta

In Pacmandu by Lavie Tidhar

The Strega Cristobel and the Old Rattler Ken by Larry Santoro

Elegy for a Young Elk by Hannu Rajaniemi

The Ones That Got Away

You can listen to my latest story, The Ones That Got Away (64 in the canon), on this week's episode of StarShipSofa. It's narrated by my golden-voiced chum, Grant Stone. There's other good stuff on the show that you can also listen to. 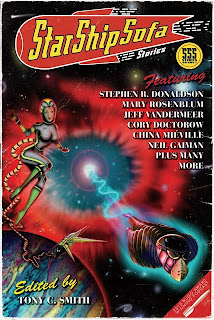 Flash Fiction: The One That Got Away by Matthew Sanborn Smith

Email ThisBlogThis!Share to TwitterShare to FacebookShare to Pinterest
Labels: 64, Grant, starshipsofa, The Ones That Got Away

I sold my story, Steve Sepp, Tasty! Tasty! (story 128) to Nature! "Wait," you say, "Isn't that a science journal (Maybe the science journal)?" It is, but they leave a little room in the back for a flash-fiction piece. They've also published Arthur C. Clarke, Bruce Sterling and currently, my Twitter pal, Polenth Blake. As Bart Simpson might say, "I am so juzzed!"

I've got a sneaking suspicion that this qualifies as my third pro-sale as far as SFWA is concerned. If so, we may be hooking up soon.

Now I Am A Gazelle

If you missed my prancing, see here: http://theonethousand.blogspot.com/2010/07/prancing-through-bookstore.html

A couple of days ago, a guy at the store asked for something and as we walked back to get it he said, "Man, you must have been an athlete. You move like a gazelle!" Certainly the first time I've ever heard those words. And I'm quite confident that he wasn't hitting on me. If this keeps up, people will demand to see video of me walking around.

The magnificent Harlan Ellison says that he is dying: http://www.isthmus.com/isthmus/article.php?article=30610 Which makes me a sad gazelle. You can listen to my open letter to Harlan Ellison on this subject here at the very beginning of the latest episode of StarShipSofa's Aural Delights: http://www.starshipsofa.com/20100929/aural-delights-no-156-robert-reed/

If you want to read my latest published work, head over to Twitter where Grant Stone's embryonic fanzine, b0t, is tweeting my Twitter serial, CITY1. One part is being released each day in October. Look: http://twitter.com/b0tzine If you're not familiar with Twitter, you'll have to read those posts (marked with the hashtag #CITY1) from the bottom up.
Posted by Matthew Sanborn Smith at 11:43 PM 7 comments: