I've always experimented with different ways to write stories. I dig trying something just to see if it will work. But it struck me today that my best stories were written using the same method. I'll share that here with you, in case you can take something from it. This is an overview, of course. There are a thousand tiny details beyond this in any story.

I have a nebulous germ of an idea and I feel the mood of the thing. Mood is key to make me want to write the thing. I've started hundreds of pieces that just lie down dead after a few paragraphs or pages. They go nowhere because I don't feel anything for them.

I hardly have characters in mind at this point. If anything, they're just placeholders. Given the idea and the mood, I figure out what sort of interaction between characters would evoke such a mood and I start writing dialogue or rudimentary direction. If I have more than one interaction in mind that will capture the feeling for me, I write the dialogue for each one. They're like lines from a play. There isn't necessarily an order to these pieces yet. The characters are being created line by line and any words they say, any movements they make, all go toward making them who they ultimately become.

An order sort of suggests itself as I go and I write any connecting bits as they occur to me. Throughout the process, I'm throwing in whatever cool ideas I want to throw in, whether they're details, lines or situations. A narrative is starting to form, partly guided by the developing characters. By now I have a rough idea of the beginning, middle and end of the story.

After I've written as much as I can think of and added enough detail to put some meat on the skeleton, I call it a first draft. Even if there are holes or entire scenes missing because I can't yet think of anything to write in those places.

Then I outline. Yes. After the first draft. I write down a sentence for each scene or key interaction and bullet point them. This way, on a single screen, I can see the flow of the story, the order of events, the number of scenes and what chunks are missing. Now I can see if scenes need to be rearranged, where the action is happening, which character is really the focus and what sorts of scenes I need to fill in those holes. I can also see if there are extraneous characters or scenes which can be collapsed into single characters or scenes.

I make any changes according to what I've discovered in the last step.

I rewrite, making it as close to a finished story as I can.

I send it to friends and fellow writers and ask them to tell me what works for them and what doesn't.

I rewrite to fix any issues. Bang. I've got myself a story.

A few months ago I came up with a list of points of what, in my opinion, makes a great story. You're welcome to agree or disagree. I'm showing them to you in case you can get anything useful from them, not to start an argument.

1. A Killer idea
2. A beginning that drags you in
3. To be told with Excitement and Crackling words
4. An emotional aspect
5. Characters that you believe are real people
6. An ending:
a. The reader doesn't expect
b. That makes sense
c. That hits home

I hope something here helps you. Good luck.
Posted by Matthew Sanborn Smith at 10:29 PM 1 comment:

I've dabbled in a boatload of podcasts recently, for some strange reason. If you miss the sound of my voice, you're in luck!

I was on the panel for the SF Signal Podcast number 133 and we talked about spoilers. How long is long enough before we can spoil the shit out of something?

Then a little later I did a Mango style intro for the SF Signal Podcast number 138.

I contributed a 100 word story to Laurence Simon's 100 Word Story Podcast number 325. Laurence and others promised to donate a buck to the American Cancer Society's Relay for Life for each story contributed to this episode, so I had to kick a story in. The theme for this episode's stories? Life. This is a huge, huge show. Like, over four hours. I'm near the end, but there are so many stories here, you're bound to enjoy lots of them, so you may want to listen.

I got in on a panel for the SFF Audio Podcast number 171 in which we discuss new releases and recent arrivals in the realm of science fiction and fantasy audio books.

And just yesterday SFF Audio ran a show we recorded the same day in which we discuss a science fiction story by Jack London called A Thousand Deaths on episode 173. If you haven't read it, don't sweat it, because before we start yapping, Julie Hoverson reads it for you!

And if, after all of that, you're still not sick and tired of the sound of me, head over to my hovel away from home, Beware the Hairy Mango! A new episode will be popping up less than two hours from the time I write this!

Get me into your hot ears and enjoy it all!
Posted by Matthew Sanborn Smith at 10:22 PM No comments:

Do What You Can With What You've Got

Posted by Matthew Sanborn Smith at 11:08 PM No comments:

Man, working on the novel means these stories are few and far between, but I finally finished story 138 of The One-Thousand! It's called Aborted Love With Chaos Motor at Lucky Pierre's. I usually don't let you guys in on the titles until they've been accepted. In this case, I was invited to contribute to an anthology and the editor accepted this today, shortly after I sent it. I really dig this story and once it's out, I'll tell you how you can get it.
Posted by Matthew Sanborn Smith at 11:15 PM No comments:

Email ThisBlogThis!Share to TwitterShare to FacebookShare to Pinterest
Labels: 138, The One-Thousand

Daisy's crashing at our place for a few days. You know, while she looks for work. 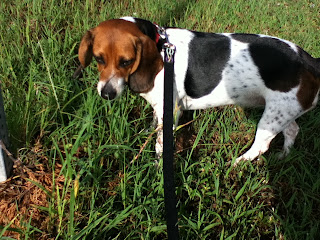 We Visit The Dali

There's a Salvadore Dali Museum in St. Petersburg, Florida that I've been wanting to visit for decades. It's over three hours away by car, so I've never gotten around to it, but The Boy and I finally hit it today and we agreed it was fantastic, worth the many hours on the road. Here's the site: http://thedali.org/home.php

The museum just moved into a new building about a year and a half ago. The bottom floor is all gift shop, second floor is for staff and third for the galleries. We couldn't take photos inside the galleries, as you may imagine, but I'm sure you can find images of almost everything online. The Boy wanted to sneak some photos anyway, but those people watch you like hawks. We could take photos outside of the gallery, so here are a few of those. Click on the images to see larger versions. I shouldn't have to tell you that really. You should know how to use the Internet by now.


Much more after the jump!

READ THE REST HERE >>
Posted by Matthew Sanborn Smith at 1:22 AM 8 comments:

Just a quick one. I'm plugging away at 138 of The One-Thousand and I realized all these little things I post on Twitter and Facebook are keeping me from posting here. So I'm posting here. Maybe the posts will get shorter but more numerous. Who know? By the way that "s" was left off on purpose.

Some people like to figure out mystery stories and twist ending stories ahead of time. I'm not one of those people. In fact, I try hard not to think too much about what's going to happen because I like to be surprised. Well, I was just listening to Philip K. Dick's The Skull (number 14 here: http://librivox.org/short-science-fiction-collection-030/) and I just ruined it for myself. Maybe Dick made it too obvious, but now I'm bummed.

Posted by Matthew Sanborn Smith at 12:14 AM 4 comments: