The Chimney Sweep and the Steeplejack

The latest episode of Beware the Hairy Mango is sitting over on that other site, just waiting for you to listen to it! The Chimney Sweep and the Steeplejack! Oh, baby!
Posted by Matthew Sanborn Smith at 5:19 AM No comments:

Now that my title has lured in all my druggie pals, look at my swell pictures! I love this horse. It stands near the Fort Pierce library, so I see it every month or so (The daughter and I do regular rounds of six or seven county libraries), except at Christmas when they surround it with a huge fake tree. I'm pissed that there's no plaque or sign with the artist's name or title of the work. 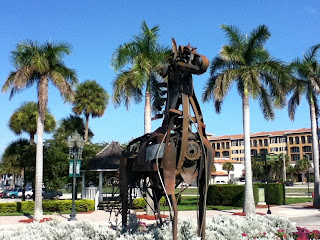 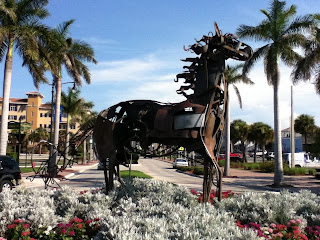 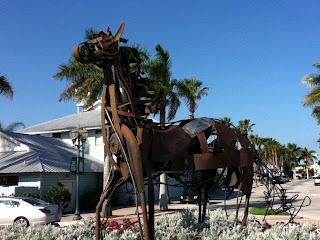 Email ThisBlogThis!Share to TwitterShare to FacebookShare to Pinterest
Labels: art

Our Story So Far

Holy crap! I haven't posted here in a month and a half! If anybody's still out there to read this, my apologies.

I've haven't had anything to add to The One-Thousand (that's the list of stories, not this blog) because I've been working on big projects. I wrote over 23,000 words of a new novel and then put that aside while I started a novella for The Galaxy Project.

I often write bits and pieces of a story at first and then add to it so it gets larger with subsequent drafts. Others write long and then cut. When I reached about 8,000 words on the novella, I suddenly felt like my skeleton was in place and declared the beginning of the second draft. I just topped 14,000 words yesterday and I'm now declaring the beginning of the third draft. I'm going to read the whole thing through tonight (for the first time, really) and make notes about what still needs to be added. I make notes in ALL CAPS because this is one thing that transfers from file type to file type. I also want to brainstorm a few different endings and see which I like best. I have an ending now, and although it's nice, I don't think it's going to stick with anyone after they're done reading.
Posted by Matthew Sanborn Smith at 12:14 AM 3 comments: