I don't talk about every new episode here, but you've waited so long I feel I should mention this one. Episode 22 - Today's Special!

Welcome, new follower Larry! He's the guy I told you about yesterday. Click on his furry face to learn more about him.

Thanks to all of you who bought a copy of Larry's and Skeet's e-book for Spider and Jeanne Robinson and to those of you who helped to spread the word. You guys are incredible! Tony is very happy with the numbers and we'll get the official total on our good works in the first Aural Delights episode of 2010, which I'm sure I'll mention all over the place.

If this link works, there might still be time to help! http://www.starshipsofa.com/shop/lord-dickenss-declaration/

2009 sucked! 2009 brought me divorce, a nosedive in my credit rating, the loss of my father and a burgled home now less one MacBook, PSP and iPod. As the wise Grant Stone says, "See ya in hell, 2009!" The shittiness took its toll on my writing. Looking back at the 2008 year in review I wanted to write 90 stories and a novel in 2009. What the fuck was I thinking? I also wanted to make 200 submissions. What I actually did was write a paltry 29 stories (many of them twit-fic and flash fiction) and made 81 submissions. Admittedly, it was one of my better years. One thing that tripped me up was a regular writing and abandoning of supposedly unfixable stories.

However some good things came out of the writing year. I finally won my years-long battle with Process Five and put his tale down in a story called Three Kingdoms. My twit-fic made its way out to people via @thaumatrope, @nanoism and @outshine. I started my own podcast, Beware the Hairy Mango (and I know some of you are asking, "Why are you writing this Matt, and not recording a new episode?"). And I wrote some stories I'm really happy with including Thank You, Mr. Goldman; A Body is for Driving and The Empire State Building Strikes Back! The soon to be happening podcast, Cossmass Infinities bought my story Fluff and Buttons on the Teddy Bear Range, so in 2010 we'll be able to hear those bears speak (maybe with Scottish accents!). I sold a few stories to Everyday Weirdness, and sold stories to Fusion Fragment and, I'm very excited to say, GUD magazine (Look for it in Issue #6). My story, The Loneliness of the Long Distance Diplomat was published by Blood, Blade and Thruster, and then almost immediately picked up for the main fiction spot by StarShipSofa's Aural Delights.

"So stop bitching!" you say. Well, bitching is my nature.

The goal for 2010 is to write 52 stories. This is doable if I can control myself. I figure I can produce 4,000 words of polished, final draft in eight hours. Double that for fucking-around time, so If I can give 16 hours a week to my short stories, I'll have it. Submissions? We'll say 200 again.

There we go. That's it for goals. Yes, I want to do a couple of other things, lose a few pounds, watch Wagner's Ring Cycle (just DVD, nothing fancy) and keep the house cleaner (Cleaner is easy. Clean is hard.), but these are all peripheral things. The writing is what merits the concerted effort.

I hope every one of you has a wondrous and happy 2010! Make it happen!
Posted by Matthew Sanborn Smith at 12:12 PM 3 comments:

Email ThisBlogThis!Share to TwitterShare to FacebookShare to Pinterest
Labels: Year in Review

Click here to help Spider and Jeanne Robinson!
Today's the big day! I hope that all of you are out there blogging about StarShipSofa's fundraiser for Spider and Jeanne Robinson. We had a fantastic response on Twitter yesterday. Thanks to all of you who tweeted and re-tweeted. I saw something like two-hundred tweets about the fundraiser. That's fantastic. I got a couple of notes during the day from Tony at the Sofa saying how he could see donation traffic picking up yesterday. I'm hoping we'll see even more traffic today.

Why should you donate?

THE SLIGHTLY LONGER VERSION
1) From Spider's Blog: Earlier his year a brilliant surgeon, Dr. Andresz Busczowski, helped Jeanne Robinson beat back a rare and virulent form of biliary cancer. But it’s so rare even he can’t say how much time he‘s bought her, how soon it might recur—and her latest blood tests have been so discouraging they’ve now decided she needs to start chemotherapy as soon as possible. Besides the prescription drugs to counteract the chemotherapy, she needs special therapies and supplements, counseling, and extensive diet and lifestyle changes, to reduce her stress level and the strain on her liver to as close to zero as possible. All those things are expensive...and like many artists today the Robinsons were already running on fumes financially.

3) You get Larry Santoro's excellent e-book novella, Lord Dickens's Declaration. Listen folks, a lot of you don't know Larry Santoro's work. In fact, most of us Sofanauts hadn't even heard of him until his stories began appearing on StarShipSofa's Aural Delights podcast. But let me tell you . . .

That's Larry's work in a nutshell. I didn't know this guy from Adam a couple of years ago and now he's one of my favorite writers. He's been hiding out in the theater world and in Horrorland, sharpening his pen and now he can slice atoms with it. Larry controls his words, they don't control him, and at the same time he feeds them out like ten-thousand feet of kite string to play in the sky. They think they're running free, they don't know. All the while he knows where every one of them runs and what they're going to do next.

And Lord Dickens's Declaration is an absolute blast. Alternate history, steampunky, put-your-brain-in-a-box-and-don't-stop-shaking-it cool. The story features a world in which historians are the big guns and a computer which stretches across hundreds of acres (sometimes), called The Beast, sends those historians back in time. And let me ask you, have you ever known historians to put things back where they found them? Me neither. And that's what drives this mad world. It's 1902 in a world where Jesus ran the Roman Empire and a ninety-something Edgar Allen Poe runs North America. Occam is the man and who the hell is Charles Darwin?

Buy this book. Read this book. Enjoy, enjoy this book. Rest the rest of the righteously smug, knowing that your pleasure is also a Karmic write-off, all 100% of your electronic money is helping good people who are seeing a rough time.

THERE'S ONLY ONE DAY LEFT!

And then tell all of your big-hearted friends to pick up a copy as well. Thanks!
Posted by Matthew Sanborn Smith at 12:00 AM 4 comments:

I had the official list of my completed One-Thousand stories on my laptop (which is gone now, in case you're just joining us). I spent the last couple of days piecing the list together again and realized that I hadn't mentioned my last three stories.

117: The Girl with the Halo
118: Introduction to Olfaction (Page One)
119: The Empire State Building Strikes Back!

The first two were done back in August, the third just ten days ago.
Posted by Matthew Sanborn Smith at 12:53 AM 2 comments:

Email ThisBlogThis!Share to TwitterShare to FacebookShare to Pinterest
Labels: 117, 118, 119, Introduction to Olfaction (Page One), The Empire State Building Strikes Back, The Girl With the Halo

I need your help.

Quickly: Science Fiction author Spider Robinson's wife Jeanne is fighting cancer and they're both fighting to pay the bills. 100% of any money used to purchase Larry Santoro's excellent e-book, "Lord Dickens's Declaration," will go directly to the Robinsons. Here's the link:

Dec 31st is the last day that people can buy Larry's story. I'd like to end the fundraiser with a bang. Let's get the word out all over the web to let people know on December 30th, there's only one day left to help. Why December 30th? Because if there's only one day left people won't put it off and say, "I'll do it later. I still have time." Make sure you link to the purchase page!

If you've got a blog, please use it. Tell your friends that are into speculative fiction ahead of time and ask them to blog as well. And let's ask the big boys to mention it, like BoingBoing, Gaiman, Scalzi, VanderMeer and whomever else you can think of. One last big push to help some good people in a bad situation.

Please tell me what you've done here, even if it's just sending some e-mails or tweets. Or post a link here to your blogpost. And if you happen to get a confirmation from someone like Cory Doctorow, then the rest of us won't all be bothering him for the same thing.

A few minutes of your time is all I ask and it could make a huge difference for the Robinsons. Thanks!
Posted by Matthew Sanborn Smith at 11:16 AM 30 comments: 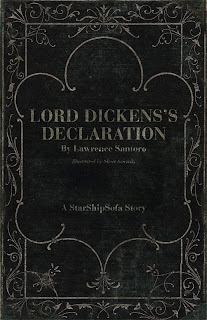 This week StarShipSofa is proud to announce Aural Delights no. 111, Part I of Lord Dickens's Declaration by our own Larry Santoro. Lord Dickens's Declaration is also available for purchase as a limited edition e-book only for the month of December and all proceeds will go to Spider and Jeanne Robinson to help with their expenses due to Jeane's illness. The Sofa appreciates whatever you can do to help spread the word. Blast off!

Lord Dickens’s Declaration is a novella by Lawrence Santoro which is an accompanying piece to StarShipSofa Stories Volume 1.

to help the Robinson’s you can….

You can purchase the ebook via PayPal or a credit card starting at £2.99,

ranging up to £100 if you would like to contribute more to Spider and Jeanne.

Posted by Matthew Sanborn Smith at 7:10 AM 19 comments: